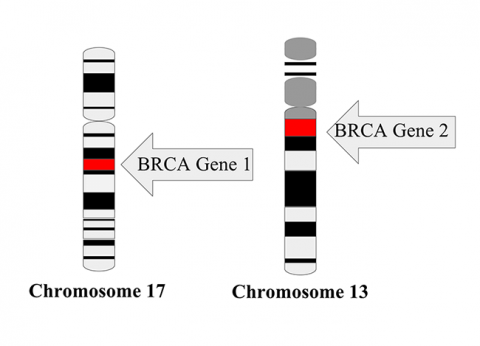 An international team of researchers has published results from the first large prospective study of breast and ovarian cancer risk in women who carry inherited BRCA mutations.

The BRCA1 and BRCA2 genes code for proteins that are critical for cells to repair damaged DNA. Specific inherited mutations in these genes increase the risk of several cancer types, particularly breast and ovarian cancer. The study affirmed earlier estimates of a substantial increased lifetime risk of these cancers in carriers of inherited mutations. But it also showed that the magnitude of risk is influenced as well by the location of the mutations within the BRCA genes and the extent of the family history of breast cancer.

“This study has confirmed estimates of the risk of developing cancer for women who are mutation carriers—that confirmation is reassuring for both women and the health care team who make important care decisions,” commented Montserrat García-Closas, M.D., Dr.P.H., deputy director of NCI's Division of Cancer Epidemiology and Genetics, who was not involved in the research.

The study was published June 20 in the Journal of the American Medical Association.

Women who know they have inherited a harmful BRCA1 or BRCA2 mutation can take steps to reduce their risk of breast and ovarian cancer. But any preventive measures—including intensive early surveillance, use of chemoprevention, and prophylactic surgery—come with their own risks. Estimates of cancer risk and of the risk reduction provided by preventive measures can help women make decisions about which of these options to pursue.

Until now, health care professionals who counsel BRCA1 and BRCA2 mutation carriers about their risk of cancer have mostly had to rely on data from large retrospective studies—studies that enrolled women after they’d already been diagnosed with cancer. Most of these retrospective studies include women with cancer in their family, rather than women recruited from the general population. Although many of the retrospective, family-based studies used for such risk estimates have been of high quality, they carry the risk of biasbecause of their backward-looking nature and the way participants in family-based studies are recruited, explained Dr. García-Closas.

Data from 6,036 women carrying a BRCA1 mutation and 3,820 carrying a BRCA2 mutation from the three registries were analyzed to determine their cumulative risks, to age 80, of breast cancer and of ovarian cancer. To be included in the analyses of breast cancer risk, women could not have been previously diagnosed with any cancer or have undergone prophylactic mastectomy.

For inclusion in ovarian cancer analyses, women could not have previously been diagnosed with ovarian cancer or have undergone risk-reducing salpingo-oophorectomy(removal of the ovaries and fallopian tubes).

The researchers also looked at the risks of contralateral breast cancer risk in women who had been first diagnosed with breast cancer at least one year earlier.

All registries followed participants using questionnaires, and with records from cancer, pathology, and death registries when available. Medical records were used to validate self-reported cancer diagnoses and risk-reducing surgeries. Participants were followed for a median of 5 years.